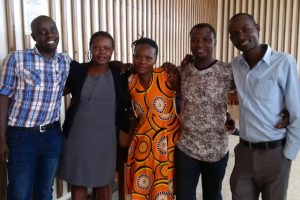 convicted the source of defamatory information.

Madina Nalwanga and Patrick Tumwesigye of New Vision, and Benon Tugumiisirize and Ronald Nahabwe – formerly of Red Pepper – were found not “criminally liable” for what was published and had no intention to defame the complainants. However, the court found the provider of the information, Ssegawa Tamale, guilty. He will be sentenced on 17 March 2017 at 2:00 P.M

“I am convinced by the evidence of A2 (Madina Nalwanga), A3 (Patrick Tumwesigye), A4 (Benon Tugumisirize and A5 (Ronald Nahabwe) that the defamatory matter that was published was conveyed by A1 (Ssegawa Tamale). I therefore do not find A2, A3, A4, and A5 criminally liable since they had no intention to defame. A2, A3, A4, A5 are acquitted and are accordingly set free,” the Chief Magistrate Karemani Jameson said. The trial lasted for two years.

The Chief Magistrate further said: “Since the story that was published had not been proved to be true, the provider (Ssegawa) of the information participated in the publication and had the intent to defame, and I accordingly convict him.”

On 13 August 2015, Ssegawa and the four journalists were charged with publishing defamatory stories in their newspapers against city businessmen Ephraim Ntaganda and Drake Lubega. The stories alleged that the duo wanted to kill Ssegawa because of a land wrangle.

Human Rights Network for Journalists-Uganda’s (HRNJ-Uganda) legal team secured a production warrant and the journalists were brought to court on 19 August 2015, and were subsequently released after fulfilling the bail conditions.

In his judgment, the magistrate noted that while the four journalists published the story without verifying, he could not criminally hold them liable for being negligent. He acquitted all the accused journalists on charges of defaming Drake Lubega.

The excited journalists said they were happy to regain their freedom and very grateful to HRNJ-Uganda and the Vision Group legal team for the support rendered to them.

Criminal defamation remains a serious threat to press freedom and an unnecessary restriction to the enjoyment of press freedom and freedom of expression. The law is always invoked under the guise of protecting the reputation of people – mainly the powerful. In 2009, the Constitutional Court of Uganda held that criminal defamation is necessary to protect the people’s reputation.

In December 2014, HRNJ-Uganda assisted the late Ronald Ssembusi to challenge the use of the criminal defamation law in Uganda at the East African Court of Justice. He argued that the law is contrary to the democratic norms as enunciated in the East African Treaty. The reference is yet to be heard by the court.

Meanwhile, the Kenyan High court in February 2017, ruled that criminal defamation is not a necessary restriction to freedom of expression and as such is unconstitutional. The same position was held by the African Court on Human and People’s Rights in December 2014. Several African countries like Zimbabwe and Zambia have taken the same path.