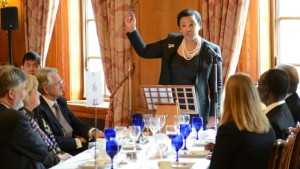 Addressing a conference of High Commissioners and judges in London on Monday 18 April, the Secretary-General made clear her determination to help governments and national bodies across the Commonwealth’s 53 member countries to confront corruption in all its forms.

“I want to make it clear that I have heard the high priority given by all member states to eliminating fraud, bribery and the corruption which continues to undermine development and compromises fairness and equality of opportunity in our societies,” she said at the event at Inner Temple, organised by the Royal Commonwealth Society.

Outlining plans to develop a “kitemark or yardstick against corruption”, Patricia Scotland QC said the Commonwealth intends to provide a system to identify which bodies, institutions, and entities are adhering to best practice in preventing corruption in procurement. “This validation will promote and differentiate organisations from those that do not share our aspirations in relation to tackling corruption,” she said.

The Secretary-General, who was formerly Attorney-General in the UK and one of the architects of the country’s Bribery Act, stated her intention to ramp up collaboration between different Commonwealth countries. As part of this effort, she announced plans to establish a new Commonwealth Office of Civil and Criminal Justice Reform, which will aim to provide all 53 member countries with the templates and support they require to develop legislation and best practices.

“It is my hope that through the Office of Civil and Criminal Justice Reform we will be able to craft the templates for legislation and best practice implementation to strengthen public safety and provide an excellent framework for legal support services throughout the Commonwealth. These Commonwealth templates for legislation and best practice will strengthen public safety and services,” she added.

The President of Nigeria, Muhammadu Buhari, was one national leader praised by the Secretary-General for demonstrating “brave leadership” in the fight against corruption. His government is working with former US Secretary of State Madeleine Albright to develop an international anti-corruption consensus.

Next month, the Commonwealth Secretariat is hosting Tackling Corruption Together, a global conference for businesses, civil society and government leaders at Marlborough House.

At the Commonwealth Heads of Governments Meeting in Malta in November 2015, leaders acknowledged the work of the Commonwealth Secretariat in promoting good governance and the rule of law, and galvanising action against corruption.

Concluding her address, Secretary-General Scotland said: “We are fortunate in the Commonwealth that we share the common law so we can create a best practice toolkit to deal with corruption and other legal challenges, so let us make the most of this advantage and set the example for the rest of the world to follow.”

Following the event at Inner Temple, the High Commissioner of Mauritius, Girish Nunkoo, commented: “The Commonwealth provides an opportunity, and the right platform, to strengthen our co-operation through effective networking. It can also identify the best-fit solutions to intensify the global fight against corruption.

“The complexity and interconnectedness of the problem requires a pan-Commonwealth approach,” he added.