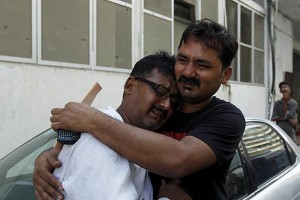 A Geo TV technician was killed and a driver for the privately owned Pakistani station was injured today in a shooting in Karachi, according to media reports. Arshad Ali Jafri, the technician, was shot seven times in the attack, and the driver was shot twice in the shoulder but managed to drive to a hospital, police told local media. Two other Geo media workers near the van escaped injury.

Unidentified gunmen on motorcycles opened fire on the broadcast van when it was parked on the street, according to reports. Police have said they are investigating.

“Condemnation of today’s violence by government officials will ring hollow unless the perpetrators of this crime are brought to justice. Police must clearly establish a motive for the attack,” said Bob Dietz, CPJ’s Asia program coordinator. “If the government of Prime Minister Nawaz Sharif is ever going to establish its credibility as a protector of journalists, now is the time.”

No group has yet claimed responsibility for the attack. Geo TV has previously been threatened and harassed by authorities and extremist groups in Pakistan. CPJ has documented how its staff have been attacked and killed over the years.

Pakistani army and security forces have been carrying out sweeps for several months, trying to quell violence in Karachi according to media reports. The Lahore High Court handed down a ruling Monday banning the broadcast or reporting of speeches of Altaf Hussain, the leader of Muttahida Qaumi Movement, according to reports. The powerful political group has been accused by authorities of carrying out violent attacks in Karachi, reports said.

Members of the political group were among a group of men found guilty of the attack on Wali Khan Babar, a Geo reporter who was shot dead in January 2011, according to reports.

Today’s attack is similar to one on an Express TV van in Karachi in January 2014 in which three media workers died when gunmen opened fire. Express executives have previously told CPJ they did not know who carried out that attack, and no arrests have yet been made.