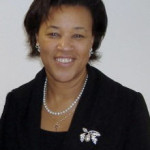 Baroness Patricia Scotland was today elected as the 6th  Commonwealth Secretary-General at the 2015 Commonwealth Heads of Government Meeting in Malta and will take office on 1 April 2016.  She is the first woman to hold this post.

Patricia Scotland was born in Dominica as the tenth child of twelve born to Antiguan and Barbudan parents. Her family moved to Walthamstow when she was two years old.  She pursued a London University (LLB) law degree in 1976 (in association with University College London) and was called to the bar at the Middle Temple in 1977, specialising in family and children’s law, and also called to the Dominican bar in 1978.

In 1991, she became the first black woman to be appointed a Queen’s Counsel. She later founded 1 Gray’s Inn Square barristers chambers. Early in 1997, she was elected as a Bencher of the Middle Temple. Scotland was named as a Millennium Commissioner on 17 February 1994, and was a member of the Commission for Racial Equality. She received a life peerage on a Labour Party list of working peers and was created Baroness Scotland of Asthal, of Asthal in the County of Oxfordshire on 30 October 1997.

On 28 June 2007 Baroness Scotland was appointed Attorney General by Prime Minister Gordon Brown. She was the first woman to hold the office since its foundation in 1315. As Attorney General she was the Chief legal adviser to: Her Majesty The Queen, Parliament and the Government, Supervisor and Superintendent of the Prosecutorial Authorities (SFO,CPS, RCPO), Leader of the Bar and had non-statutory oversight of the prosecutors in government departments, the Treasury Solicitors Department and armed services prosecuting authority.