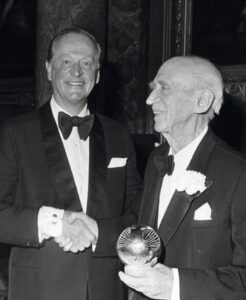 Lord Astor of Hever (L) presents Sir Harry Brittain, founder of the Commonwealth Press Union, with The Astor Award in 1973

The Astor Award was created, by his family, in memory of Lord Astor of Hever who was, for many years, the President of the Commonwealth Press Union and very closely involved with its development.  He had a particular commitment to Press Freedom and this award has become closely associated with this field.  Since his death, the Award has been presented by, intitally, his widow Irene, Lady Astor and on her death either by their son Lord Astor of Hever or his brother Phillip Astor.

This prestigious award  is one of the oldest press freedom awards, first being presented in 1970.   Previous winners represent a remarkable cross-section of individuals who have made an enormous contribution to the Commonwealth newspaper industry, particularly in the field of press freedom.

The Astor Award was last presented by the family in 2021 to Gavin Ellis of New Zealand.

In recent times the award has been presented by Lord Black of Brentwood, the Chairman of the CPU Media Trust Trustees.  After a gap of over ten years, it was once again awarded to the Human Rights Network for Journalists – Uganda in 2016.

The 2017 Astor Award was presented to the Pakistan Press Foundation in recognition of its five decade fight for press freedom in one of the world’s most hostile media terrains and in 2018 it was awarded posthumously to Daphne Caruana Galizia, Malta: for her courageous and inspiring fight against corruption.

2021 saw the presentation of the Award to Professor Robert Pinker for his unstinting support for press freedom and self-regulation across the Commonwealth.