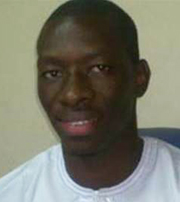 The Committee to Protect Journalists calls on Gambian authorities to disclose the whereabouts, health, and legal status of Alagie Abdoulie Ceesay, a radio journalist who was last seen on July 2 with individuals reported to be Gambian state security agents.

“Gambian security agents have long stoked a climate of fear for journalists working in the country,” said Peter Nkanga, CPJ West Africa representative. “We call on Gambian authorities to immediately release Alagie Abdoulie Ceesay and to stop trying to silence the media through intimidation.”

Ceesay, the managing director of the independent community station Taranga FM, was at the station’s offices in Sinchu Alhagie village, southwest of the capital, Banjul, when he was told that men were outside looking for him, according to news reports citing station staff and his family members. Ceesay went outside to meet the men and then left with them in a black vehicle with tinted windows. He has not been seen or heard from since, the sources said.

The local Gambia Affairs news website reported that Ceesay was detained by agents of the Gambia’s National Intelligence Agency. It wasn’t clear how the website determined they were state security agents. The security service has harassed journalists in the past.

CPJ’s calls to David Kujabi, spokesman for the Gambian Police Force, and Louis Gomez, deputy director of the National Intelligence Agency, were not answered.

Ceesay was arrested on January 1 and detained overnight, and reported to the police and the National Intelligence Agency periodically for two months, he told CPJ at the time. Police ordered the station to stop broadcasting, but did not provide a reason for the shutdown. Media reports speculated that the station’s closure was a result of a foiled coup attempt. The station, which local journalists said did not report on the attempted coup, did not operate for three days. It began broadcasting again after being warned to play only music and stop all regular programs, including current affairs, news reports said. The station complied at the time, but later resumed its regular coverage.

It is not clear why Ceesay was detained. Taranga FM translates news from international media and local newspapers into local languages, according to CPJ research. The station has been arbitrarily shut down three times in under five years by authorities and the station staff interrogated several times at the NIA in relation to their work, according to the Gambia Press Union.

The Gambia Press Union condemned Ceesay’s disappearance and said it supported his family in lodging a complaint with the police, according to news reports.

Ceesay’s case is reminiscent of another Gambian journalist whose health, whereabouts, and legal status have been unclear for years. On July 7, 2006, “Chief” Ebrima Manneh, of the pro-government newspaper Daily Observer, was arrested by two plainclothes officers at his office. The reason for his arrest was unclear, although some colleagues believe it was linked to his attempt to republish a BBC article critical of President Yahya Jammeh.

Over the years, sketchy and conflicting details emerged about Manneh’s whereabouts and status. In 2006 and 2007, witnesses reported seeing the journalist in government custody. In 2009, an unnamed police official speculated Manneh was no longer alive. In 2011, Jammeh said Manneh had died but that the government had no involvement in his death. But, later that year, Justice Minister Edward Gomez said the journalist was alive.

Gambian authorities have not responded to CPJ’s repeated inquiries about Manneh.

On June 10, 2014, the Nigeria-based Economic Community of West African States Court of Justice held that previous rulings against the Gambia, including in Manneh’s case, proved the government was fostering a climate of impunity which in itself was a violation of freedom of expression.