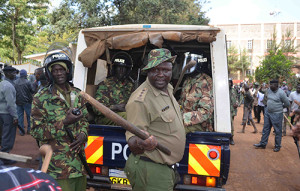 The Committee to Protect Journalists condemns an attack on Tuesday against four journalists covering a peaceful protest in western Kenya and calls on authorities to investigate the attacks and hold the assailants to account.

Richards told CPJ that the protesters and the protest organizers fled the area after they were threatened by a mob of residents. Police helped take the protester organizers to safety, he said. The mob then turned on the journalists, who were left at the scene. Richards said the mob began to punch, kick, and beat Waswa with clubs. “We then tried to intervene to assist our colleague, only to be beaten ourselves,” Richards told CPJ.

Police officials were not present when the journalists were attacked. Wamalwa and Waswa sought treatment at the Kitale District Hospital for bruises they sustained during the attack, Richards said.

“The rate of attacks and threats against the Kenyan press at the county level has increased dramatically over the past few months,” said CPJ East Africa Representative Tom Rhodes. “Authorities in Trans-Nzoia County must ensure the perpetrators of this attack are arrested and held to account.”

Trans Nzoia Communications Director Maina Milimo told CPJ he was shocked to learn of the attack and said other demonstrations had taken place in the county without incident.

Police arrested one of the alleged assailants on Wednesday but released him on bail the next day, three of the journalists told CPJ. Wamalwa told CPJ that after the suspect was released, he threatened to “deal with” Wamalwa while the journalist was having lunch at a local restaurant.

Wamalwa told CPJ that prior to the protest he had received threats in person from individuals who said that West FM had reported negatively about the county government. “My station has a wide listenership and frequently interviews the public on western Kenya-based issues, who are sometimes openly critical of the county government,” Wamalwa said.

Violence against journalists in western Kenya is on the rise, CPJ research shows. On April 30, John Kituyi, the editor and publisher of the Mirror Weekly, a private newspaper based in the town of Eldoret, died from injuries he sustained after being hit repeatedly by unidentified assailants, according to news reports. The journalist wrote articles that focused primarily on regional politics in western Kenya, the reports said. No one has been held to account.