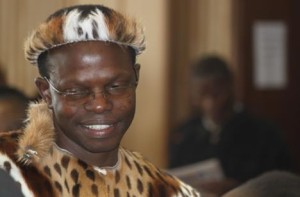 In this photo taken on 4 June 2014, lawyer Thulani Maseko appears in court in the traditional animal skin garb of a Zulu warrior, in Mbabane, Swaziland © AP

As of 19 March 2015, Thulani Maseko has been placed into solitary confinement for the next 21 days, following a letter he wrote that became public.

Maseko penned a letter to this family and friends on the one-year anniversary of his detention. His lawyer Sibusiso Nhlabatsi was making a routine visit to Big Bend prison to see Maseko when he stated the following, as reported by OkayAfrica:

“Kindly take notice that the Big Bend prison authorities have condemned Thulani Maseko to solitary confinement for a period of three weeks starting from today Thursday March 19, 2015. While the prison officials were reluctant with the information they cite Maseko’s continual writings whilst incarcerated as a violation of the prison code [Ed. note: no such prison code exists] and the reason for solitary confinement punishment. When I inquired as to the effects of the sentence; I was informed that he will forfeit some privileges i.e. visitations. This means that for three weeks his relatives and legal team won’t be able to see him. The prison authorities were reluctant with the information citing that it was all an internal process.”

Maseko and Bheki Makhubu were sentenced to two years imprisonment in July 2014 for criticising the Swazi Judiciary for the way they handled the Chief Vehicle Inspector Bhantshana Gwebu contempt case.

Jeffery Smith of Robert F. Kennedy Human Rights urged the public to sign a petition and to continue using the #SwaziJustice hashtag to raise awareness of “this brazen crackdown on Thulani’s basic human rights”.

As mentioned in a blog post by MISA Regional Director Zoe Titus, which formed part of the #SwaziJustice campaign that took place last week, she stated, “this case is not an isolated incident. Rather, it is reflective of the repressive environment in which the media and civil society operate in Swaziland”.

MISA will continue its support and solidarity of Thulani Maseko and Bheki Makhubu, and are making every effort to publicis­e this injustice, as well as garner regional solidarity for their cause