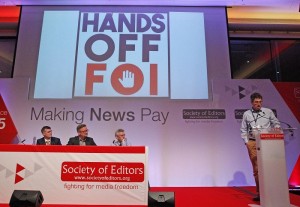 The Society of Editors,
NIGEL HOWARD©

The new President of the Society of Editors has put freedom of information at the top of his agenda for the year ahead.

Nick Turner, who is poised to take over at the Society’s helm, said the fight to protect the Freedom of Information Act from government reform would be “one of the biggest issues of the year”.

It followed the launch of the Society’s ‘Hands Off FOI’ campaign in conjunction with Press Gazette and HoldtheFrontPage yesterday.

Mr Turner, digital strategy manager at the CN Group and founder of the Digital Editors’ Network, also said the Society was now at the forefront of the debate on digital media.

Addressing guests at last night’s gala dinner, Mr Turner said: “Far from lagging behind in the digital debate, the Society is now at its cutting edge.

“Alongside that we have focused on FoI, set to become one of the biggest issues of the year to come, our relationship with the police, the BBC and diversity in journalism.”

The Society is urging editors nationwide to lobby their local MPs to speak out against proposals that could water down the FoI Act.

It says the legislation is a key tool in helping the media inform the public but that reform threatens to undermine it.

FoI campaigner Maurice Frankel, who delivered a rallying call to editors on the subject at the conference yesterday, was honoured by the society for his robust defence of freedom of information principles over more than two decades.

Mr Frankel said it was a “terrific honour” to be made a fellow of the society during last night’s dinner, crediting the organisation as a key backer in the campaign for freedom of information.

Doug Wills, the Society’s outgoing president, said there was “no bigger battle” in the year ahead than the FOI campaign and praised Mr Frankel for his efforts.

He added: “Maurice is a not a media person but he is at home in our ranks as a vital communicator and campaigner on behalf of those of us who seek to inform the public.”

Former Guardian editor Alan Rusbridger and ex-chairman of the Editors’ Code Committee Ian Beales were also honoured with fellowships during the conference.