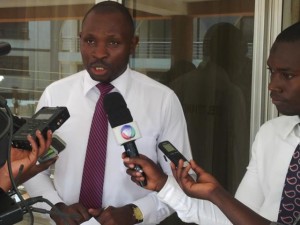 Human Rights Network for Journalists–Uganda (HRNJ-Uganda) is delighted that an independent journalist, Timothy Kalyegira Nyakahuuma, has finally regained his freedom after five years of battling with a criminal defamation trial, throughout which he was accused of defaming the president of Uganda.

On 30 September 2015, the Grade One Magistrate at City Hall Court, Kampala Moses Nabende, dismissed criminal defamation charges brought against Mr. Kalyegira for failure by the state to adduce evidence in court for the last five years.

The magistrate noted that there was “no strong and convincing reason” to continue with the case, and therefore dismissed it. Kalyegira was dragged to court in 2010 when prosecution alleged that on 12 and 16 July 2010 – with intent to defame the person of the president of the Republic of Uganda – he unlawfully published in an online paper The Uganda Records, that President Yoweri Museveni was responsible for the bomb blasts that occurred at Kyaddondo Rugby ground and the Ethiopian Village at Kabalagala.

In 2013, Kalyegira challenged his trial at the High Court of Uganda, claiming that The Uganda Records – where the alleged defamatory statements appeared – was a cyber space publication not envisaged within the definition of the law. However, Justice Lameka N. Mukasa rejected this reasoning, that “any information typed on computers and posted is conveyed by cyber space to be read by whoever has access to the internet and can be printed out for further circulation”.

HRNJ-Uganda has noted with concern a steady increase in trumped up criminal defamation charges against journalists who are most involved in critical and investigative journalism. Over a dozen journalists have pending criminal defamation charges. On 23 August 2015, Madinah Nalwanga and Patrick Tumwesigye of the Vision Group, and Benon Tugumisirize and Ronald Nahabwe of Red Pepper were charged with criminal defamation before Buganda Road Chief Magistrate, Lilian Bucyana. They were granted an abnormal cash bail of two million shillings each, which some of them could not raise immediately and were remanded to Luzira Prison for a week. The four journalists are accused of defaming Kampala business men Ephraim Ntaganda and Drake Lubega in some land ownership news stories.

In the same month, Pidson Kareire of Drone Media was ordered to report to to Kampala’s central police station on allegations of defaming the proprietor of Sir Apollo Kaggwa schools, Musa Sewava. Hewas released on police bond pending investigations and is still reporting at Central Police Station.

In October 2014, the Kalangala Magistrates court convicted and sentenced Ronald Ssembuusi (a CBS correspondent) to one year in prison, or a fine of one million Uganda shillings. Two months after the conviction and sentence, Ssembusi passed on. May His Soul Rest in Eternal Peace.

These wanton actions of the police and the Directorate of Public Prosecution (DPP) have caused feelings of distress and depression within the journalism fraternity because they don’t know what statements or stories amount to criminal defamation, as opposed to factual reporting and fair comments.

We are therefore perturbed by the office of the Directorate of Public Prosecution that has continued to sanction criminal defamation charges in total disregard of the the fundamental principles of freedom of expression, right to speech and communication.

The Directorate of Public Prosecution should desist from sanctioning politically and economically motivated cases against journalists that curtail freedom of expression – which is a cornerstone of any free and democratic society.

Uganda is witnessing a critical time of general presidential elections, a process which calls for effective participation of the media. This critical intervention requires a free and independent media, which can hold all political aspirants to account, as opposed to the current one which is littered with tramped cases as evidenced above.

The state should allow the media to freely engage into the national elections without threatening critical media houses with retaliations.

We appeal to all the media practitioners, civil society, leaders of the various religious, social and political sectors and the international community to unite towards this noble cause.