Malaysian political cartoonist Zunar has been charged in Kuala Lumpur with nine counts of sedition for tweets posted following a controversial court ruling. Zunar could be sentenced to 43 years in prison if convicted. He pleaded not guilty. His bail was set at 13,500 RM (US$6,207.00).

Zunar (Zulkifi Anwar Ulhaque), known for cartoons lampooning the excesses and questionable practices of the government of Prime Minister Najib Razak, was previously charged with sedition in 2010. Over the years, his cartoon books have been periodically confiscated and bookstores banned from selling his work. Recently his webmaster was ordered by police to provide a list of those buying his books online.

“They are really trying to shut me off from criticizing the government, so I think it’s clearly politically motivated,” Zunar said of the latest charges.

The tweets in question criticized a Federal Court decision on February 10, 2015, which upheld the conviction and five-year prison sentence of opposition leader Anwar Ibrahim on a sodomy charge. The United States has also questioned the impartiality of Malaysia’s judiciary in the case.

It was following the growing support of Anwar Ibrahim’s opposition party in the 2008 and 2013 elections that the government intensified the arrest on sedition charges of its critics in academia, the press and advocacy groups, as well as opposition politicians. Malaysia’s Sedition Act, brought in under British colonial rule, defines ‘promoting hatred against the government’ as seditious.

CRNI Executive Director Dr. Robert “Bro” Russell has called for the government of Malaysia to “immediately stop all proceedings against Mr. Zunar and all other journalists and human rights workers using the outdated and colonialist inspired Sedition Act.”

Human Rights Watch has called these latest charges against Zunar evidence of a concerted government campaign to spin “peaceful criticism into a criminal act that threatens the state.”

The free-speech advocacy group ARTICLE 19 has also called for the charges against Zunar to be dropped, stating: “This is clearly an attack on freedom of expression, and an attempt to stifle all legitimate criticism of the government, who have been carrying out a sustained campaign of harassment against Zunar for almost five years.”

Zunar’s response to the charges was a self portrait showing the artist shackled by the Sedition Act but still cartooning, which was posted on his Facebook page and tweeted.

Zunar’s trial is scheduled to begin on May 20th. 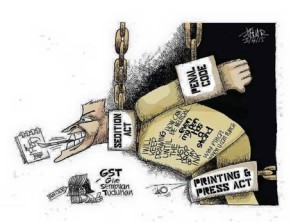