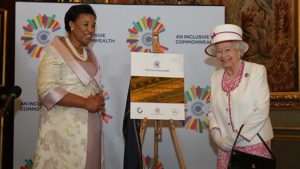 The atmosphere was full of comradery and optimism today as The Queen shook hands with athletes, young people, High Commissioners and staff at the launch of a new Commonwealth Hub. The ceremony took place at Marlborough House, the Commonwealth’s headquarters in London.

The Commonwealth Hub will be located directly across from Marlborough House in a building to be renamed Commonwealth House. It will become the home of a network of Commonwealth accredited organisations.

Inviting The Queen to unveil a special plaque to mark the launch, Commonwealth Secretary-General Patricia Scotland described the monarch as the source of inspiration for the Hub.

A message from Buckingham Palace stated: “The Queen has been Head of the Commonwealth throughout her Reign. This is an important symbolic and unifying role. As Head, Her Majesty personally reinforces the links by which the Commonwealth joins people together from around the world. The Queen’s official 90th birthday celebrations, which will take place this weekend, will be attended by representatives from 53 Commonwealth countries.”

Speaking at the launch, the Secretary-General said: “We, the participating organisations, have decided that we want a new future. A new future of collaboration, of partnership and innovation. We hope that by creating this hub and renaming Quadrant House as Commonwealth House we start on a new journey.”

She added: “We have 53 countries in our family, from the tiny to the large, all cultures, all people, all languages. And we know that if we come together in partnership we will do so much more than if we continue on our own. So this is a hugely wonderful and exciting beginning.”

The Commonwealth Hub, Secretary-General Scotland said, will help to deliver her vision to work more closely with all Commonwealth organisations to honour the values of the Commonwealth Charter and the commitments on health, education, climate change, good governance, equality and the rule of law.

“Because the Commonwealth has such a big reach, I think it’s almost a duty to do this,” said Netball player, Helen Housby, who attended on behalf of the Commonwealth Games Federation. “If you look around the room here there’s so many different nations represented. I think what they’re trying to do is get a set of values out there and give back more to the community.”

The 2015 Queen’s Young Leader, PJ Cole from Sierra Leone, represented the Royal Commonwealth Society.  He said the new hub will be a boost for the Commonwealth: “Pooling resources together means that you’re able to go further and you have a wider reach. I think it’s a good initiative because the Commonwealth is doing good, but I think it can be stronger and have a better voice around issues.”

Carl Wright, Commonwealth Local Government Forum Secretary-General, described the Hub as an “exciting development that will help us better coordinate our work with other Commonwealth organisations and provide added value to our members and citizens of the Commonwealth to help deliver development, local government, good governance and a better quality of life for the 2.3 billion citizens we and our members serve.”

Director of the Commonwealth Foundation, Vijay Krishnarayan added: “Together, Commonwealth organisations represent a breadth of expertise, a diversity of experience, that really helps to animate Commonwealth principles, goals and objectives.”